All interesting or frequently asked topics will be moved here for reference. If you have a general question, please check here before posting. You may reply to threads here, but not post new ones. Chatter and off-topic remarks will be purged. Please contact a moderator to have a thread copied here.
Post Reply
65 posts

trickyricky wrote:Perhaps not....I've notice that the HF caps (with the silver stripe on the negative side...NOT GOLD) with a date code of "97FH" did not leak. I replace them in three zxti amps and all with the same date code did not leak. Not if you want to be on the safe side then replace them and you won't have to worry about them, always a good idea to do so.

I have an old m50 13456. I gave the amp to my brother not knowing about the cap issue. he plugged it in to use it to smell burning. I opened it up to notice that the 3 larger caps on the top right of the amp the bottom one had sparked. Picture is below.

I have some solder experience with my RC cars but no electronic repair experience. I would like to however, try and replace these if the board isn't ruined.

My questions are are these the same caps that are in your tutorial that I would buy from digikey?

The image maybe doesn't give you all you need i am not sure but can i clean up those char marks and if so what is the process of determining if it is unrepairable?

Thanks for the tutorial and assistance. I hope I can make this thing work. 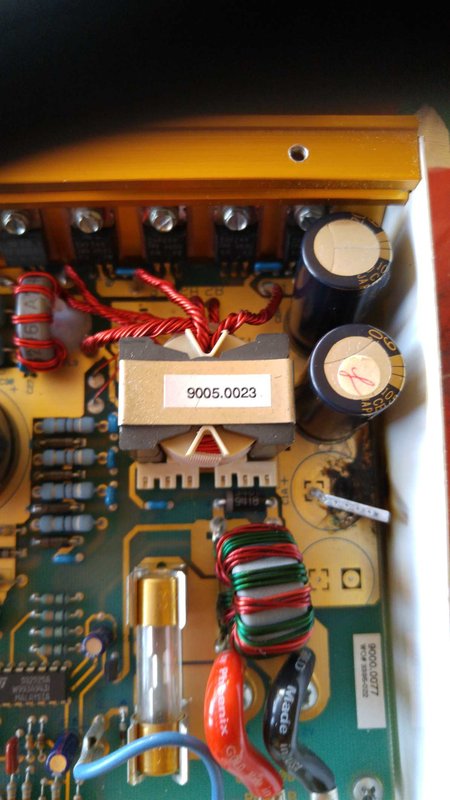 It's repairable as long as you have at least one good set of cap pads and no damage to traces. You might not even have board damage, use 99% isopropyl alcohol.
Top

Earlier in the thread the question was asked if this problem affected the Sapphire line and I never seen it answered. Can someone please clarify. I took it to a local shop and they did not really want to replace the caps and told me that at this point there were no signs of leakage and it would be a waste of cash. So now I am hunting someone else to do the recapping but was curious if it would be safe to actually run this until I found someone.
Top

Stravus wrote:Earlier in the thread the question was asked if this problem affected the Sapphire line and I never seen it answered. Can someone please clarify. I took it to a local shop and they did not really want to replace the caps and told me that at this point there were no signs of leakage and it would be a waste of cash. So now I am hunting someone else to do the recapping but was curious if it would be safe to actually run this until I found someone.


Yes the Sapphires also have the same leaky caps...if they are dark blue with a gold or silver negative stripe and have "HF", "HFZ" or "HFQ" on them then they need to be replaced. I notice leakage on my 3.0X.
Top

I would remove the rail cap board if I were to replace the rail caps. Careful not to damage the traces and via holes.
Top

The rail caps the tops are bulged so I think they need to be replaced soon. Just not sure if I want to try that or let someone else do it.
Top

Hello all. New to the forum and intending to re-cap some PG amps. Two M50's and one ZPA 0.5. All purchased new by me a long long time ago but not used much. The ZPA 0.5 has actually never been powered up... Too late now for warranty claims if it does not work I guess

No matter, I'll replace the caps and give the boards a look over before connecting power. A special thanks to Eric D, this guide is exactly what I need

Now to the actual question. I see that Nichion UHE series is commonly used in recapping these amps, but I've decided to try the new Nichion UHW type caps. Both ESR and Ripple current looks better then UHE (and Panasonic FC).

Does this look like reasonable capacitor choices, and have anyone used the UHW series Nichions in a re-cap?

EDIT: I have received the caps from mouser and re-capped one of the M50's. Fitting four UHW1C682MHD standing up was no problem height wise so I did that. The most tricky part of the operation was extracting the old cut-off cap legs from below (according to this tutorial). They were cut very close to the board and I had trouble gripping them, next time I'll leave a little more sticking up on the top-side and grab them from there.
Top

About 13 years ago I did my first cap replacement job on a ZX250v2 I found to be leaking. The originals in it were Nichicon, so I replaced them with the same series Nichicon at that time. The only difference was I went with the larger value so the height would be the same as the originals (as cap technology had improved and the original value was then much shorter). My primary concern was the look of the amp, not the performance of the caps. In this application any cap performance improvement would not be noticeable.

I ordered extras with my original Digikey purchase, and these ended up in the next cap job I did. I then bought more and continued to use them. This is the reason I have stuck with those same caps all these years. Instead of stocking different brands and versions, I just stick with the same one.

So long as the replacement cap physically fits, can tolerate reasonable heat, and is 16V or greater, I cannot see any problem with it.
Got "schooled" by member shawn k on May 10th, 2011...
No longer really "in tune" with the audio industry, and probably have not been for some time.
Hands down the forum's most ignorant member...
Don't even know what Ohm's law is...
Top

Hi Guys/Gals, I'm new to the site and have been a car audio enthusiast for years. I used to have a Phoenix M50 and M25 in the late 90's and sold them with my mustang. Here I am as a family man and I just got a ZX350. I purchased off someone online and it was stored for 20 years wrapped up in a closet. I'm planning to get new rail caps and input caps. I've read about the 5600uf caps and some using higher values. Same for the rail caps. As well i noticed there's a zx350v2? What is the different in the v2 compared to the v1? Did phoenix upgrade the caps in v2? Anyways, would someone please let me know what caps I should order for the ZX350v1? Can I get a list (link or list) of the different parts that are changed in the v2? Is it possible to change parts so my v1 can be upgraded to v2? Also, I have a blade (fin) broke off on the fan. It still works but thinking of replacing it. It seems to be a simple DC fan from a PC. Is there a part# I can order from someplace online? Anyone have a schematic for the ZX350?

Thanks and looking forward to getting a response from someone. This site looks like there is a lot of knowledge to be shared!

v2 had a different fan in it I know for one thing but I can't remember if there were some other small updates as well. I am sure someone else will know all the details.
what else can I say I am a grumpy asshole most of the time.
Top

Thanks ttocs. But as for the rail caps. Should I replace them with the same value or upgrade with a higher value? Anyone have a link for the digikey or mouser rail caps they used for a ZX 350, 450 amp? Also, did anyone replace the plexi windows on the side?
Top

Ok, so I replaced the power caps and rail caps. I think everything went well but I energized the amp and the the OVL turns on for a second, the fan stops and then powers up again and get the green light. It stays lit and fan runs. So I then connected a speaker on one channel (left) and no sound. (Only tested this channel). I adjusted the gain pot and no sound (per say) but get static as I change the gain. The static sound pops here and there and does increase in volume as I increase gain. If I turn the gain all the way up, it turns off!? I’m using a little 12V power supply to test (didn’t want to use a battery or the car itself in case if blew up!). Should I use a proper 12V source (battery)? But checked the voltage at the rail caps and found 38.7 Vdc each cap. Any ideas?? Where I can start testing this Zx350v1 by the way. Thanks!!
Top

One difference between the v1 and v2 versions of that amp was the x-over control pots. The ones in the v1 fail, and one of the signs of failure is what you are experiencing, with channels not working, static, popping, etc.
The gain and bass pots in these amps tend to fail over time as well.
I typically run the pots back and forth a bunch of times, and press the high / low pass switches a bunch as well, and then cross my fingers and hope they all work when I power the amp up.
Got "schooled" by member shawn k on May 10th, 2011...
No longer really "in tune" with the audio industry, and probably have not been for some time.
Hands down the forum's most ignorant member...
Don't even know what Ohm's law is...
Top
Post Reply
65 posts